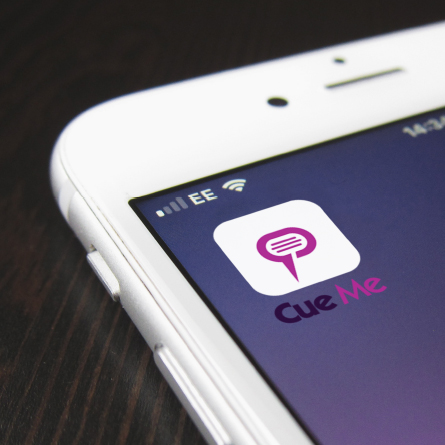 CueScript are developing a range of exciting new software applications designed to enhance the prompting process for presenters, producers and technical staff.

CueMe is an app for CueScript’s CueiT prompting software application that opens up the ability for presenters and production staff to preview scripts in real time on their mobile devices, whether in the studio or on location, eliminating the need for printed copies.  This environmentally friendly, paperless advanced viewing of up-to-date information is also perfect for script reference at OB's or on location, without effecting the live prompt output.

CueMe interacts with CueiT’s API to allow a user to see active rundowns and scripts within their CueiT application, on a mobile or tablet device, with zoom functions for ease of viewing and personal font size preference. CueMe has support for both LTR and RTL languages. Users can browse and scroll through current and upcoming scripts, without affecting the on-camera prompt, and see updates in real-time with auto-refresh.

There is no limit to the number of users in a production that can use CueMe, and the app is also capable of connecting to multiple CueiT applications and remembering those locations, so users can easily move between studios in a larger facility.

- Scroll through any scripts without affecting the on-camera prompt.
- Reference real-time updates of scripts, facts and figures on your personal device from any location.
- Environmentally friendly, paperless, and interactive.

The CueMe app is available for iOS from the AppStore or Android from Google Play.

Free to download, simply requiring a new license and registration on the CueiT prompting software.

Compatible for all CueiT license types (requires CueiT 2.5.0 and higher).

Our equipment and experienced, professional and friendly team are available for hire worldwide.