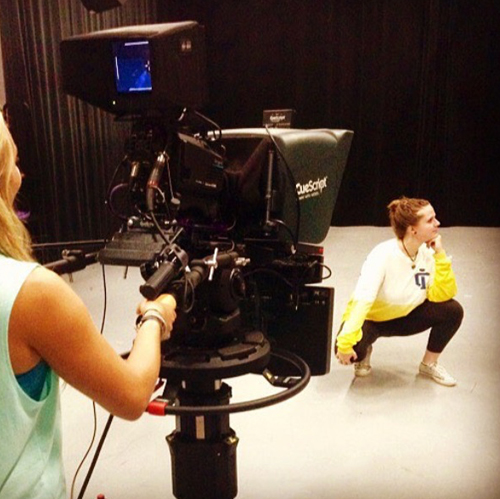 Ikegami's Precision Image Quality, Ease of Use, and Reliability are Central to HD Upgrade at Roy H. Park School of Communications (...and CueScript are pleased to provide the prompting!)

Ikegami equipment has a successful history at Ithaca College, which previously had Ikegami SD cameras for its academic program as well as for Ithaca College Television, a student-run station that constantly creates original programming.

"Ithaca College has been an Ikegami customer for a long time," says David Priester, Director of Technical Operations for the Roy H. Park School of Communications. "We always strive to get equipment that our students will be using when they graduate and join the workforce. That's an important reason why we selected Ikegami."

The school's eight HDK-95C cameras are standing up to a heavy workload at Ithaca College, while exposing its students to the power of CMOS sensors. "These cameras produce a first-class image," Priester says. "They're being used seven days a week, from eight in the morning until 11 at night - we probably put more hours on the equipment than a local newscast. In addition, our student station is the longest-running operation of its kind in the country, and they stress the facilities even more than the classes do."

"From our past experience with Ikegami cameras, we know that they hold up. The cameras we just replaced had been working continuously for 15 years, and they had an excellent track record. In the rare occasion that they had an issue, Ikegami was very responsive. We know we can trust them to help when we need it - that counts for a lot."

"We try not to back ourselves into a corner when it comes to studio upgrades," Priester adds. "The HDK-95s are 4K capable, so we have that option when needed. That's not something that's available on all cameras in this price range. Throughout the upgrade, Ithaca College worked closely with the reseller, AV Corporation, to assemble the camera package involving Ikegami, CueScript and Cartoni."

One of the Ikegami HC-HD300's is being used in a small insert studio, while the other is joining several Ikegami HDK-77EC cameras on Ithaca College's remote truck. "The HC-HD300 is our sideline camera," explains Priester. "The picture quality matches up very, very closely with our HDK-77ECs and HDK-95Cs. But as a more cost-effective camera, we're more open to putting it in the line of fire at sporting events."

At Ithaca College, Ikegami cameras are essential to preparing students for their next assignment after graduation. "If you're going to teach students in a technology-based discipline, you have to give them the best possible tools to work with," David Priester says. "Ikegami embodies that philosophy."